For information on the types, medicinal, and culinary uses of Cinnamon, please check out Part One.

Part Two will be about how to grow Cinnamon.

How to Grow Cinnamon:

**Not only is cinnamon good for us, it is also very easy to grow! However, unless you live in zone 9 or higher, you will need to grow cinnamon in a greenhouse or just a corner of your home as long as the temperature does not go below 60 degrees Fahrenheit.

**Cinnamon is derived from the bark of a tropical evergreen tree. The leaves are ovate-oblong in shape, dark green on top and light green underneath.  Both the leaves and bark have an aromatic, spicy scent. It has small, yellow-white flowers that supposedly have a slightly disagreeable odor, and bears small, dark purple, inedible berries.

**As long as the soil is kept slightly dry, a potted cinnamon plant can thrive for years without special care. You can keep the plants as small as 3 feet by pruning regularly, or you can re-pot them over time into a 12- to 14- inch pot and allow them to reach up to 8 feet tall.

**On occasion, cinnamon produces seeds, which can be picked and planted. These seeds must be picked when ripe (black in color) and planted right away because seed viability is limited.

**A healthy cinnamon tree can produce cinnamon bark for about 45 years. 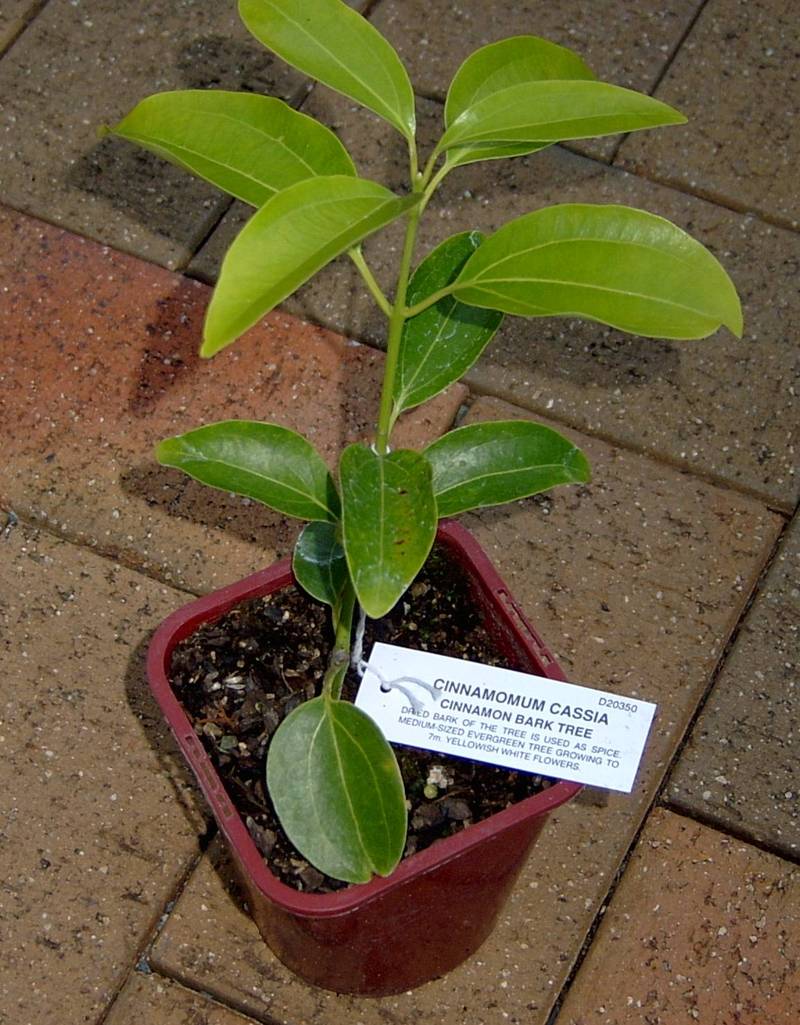 **Give cinnamon trees anything from full to partial sun and they will be happy. They will die if put in complete shade.
**If growing them indoors in a pot, give them well-drained, acidic potting mix (half sphagnum moss and half perlite)

**If growing them outdoors (zone 9 or higher), they prefer a sandy soil that is enriched with organic matter.

**Cinnamon is propagated by seed, three-leaved cuttings, layering, and division of old rootstocks, the latter resulting in earlier harvests.

**The short-lived seed germinates in 2–3 weeks. Pulp should be removed from seed before planting. Seeds are probably better planted in a nursery.

**After about four months, seedlings need to be transplanted to containers. Four months after that, they need to be planted either outdoors or in the next size up container. From this point on, the larger the pot, the larger your indoor cinnamon tree will become.

**Resist the urge to baby your cinnamon tree. These plants will do quite well with a minimum of involvement from you. You can fertilize with a liquid fertilizer once a month during the active growing season, but even this is not necessary.

**Prune at any time for harvest or to prevent plants from becoming too tall or wide.

**Keep your containers on the dry side, giving them less water than you think you should give, because these plants are susceptible to root rot. This is pretty much the only issue with these easy-to-grow plants.

**Whether your cinnamon tree is indoors or out, be sure to maintain a temperature no lower than 60 degrees at all times.

**Allow the tree to grow for at least two years. Do not attempt to harvest cinnamon bark from an immature tree.

**After about 2 years, cut back the stems close to ground in order to encourage coppice. Four to six of the coppice shoots should be allowed to grow for about 2 more years.  Prune them to maintain straight canes. When 2–3 m high and 2–5 cm in diameter, these canes are harvested.

**From then on, cut down the plant every couple of years down to a few inches from the soil. Wait for it to grow new shoots.

**Your first harvest of the bark should be after the second year of planting. You could even wait until year 3 if you want. You can then harvest every 2 years or so after that.

**There are two different types of bark on your cinnamon tree that you can harvest: young whips and mature wood.

**For harvesting young whips, cut the whips into 3-inch segments. Score the bark lengthwise from end to end, cutting just deep enough to loosen the bark. Peel off the bark, which will naturally curl. Dry in an open, airy, warm spot such as on a kitchen counter. For a thicker, compact stick, layer the bark pieces inside one another before drying. Once dried, the sticks can be shaved for the spice or used in a mulling mix.

**For harvesting the bark of mature wood, cut stems into 3-inch segments. Make a lengthwise slice halfway into the stem, but do not go all the way through. The bark will not peel as easily as it does from a younger stem. Instead, scrape out the core and pithy inner lining, then allow the remaining bark to dry completely. You can layer several pieces of bark together to produce a thicker stick called a quill.

**Check out this youtube clip of a man harvesting the bark of mature wood: http://www.youtube.com/watch?v=-w_CCI79tr4

**If you are having trouble peeling the bark, you can put about two inches of warm water into a plastic tub and soak the peeled shoots. This will help loosen the inner bark and make it easier to peel away.

**Harvesting cinnamon bark requires that you cut the branches or stems from the plant itself. Score the bark without cutting all the way through the bark. Once you have done this a time or two you will know exactly how deep to go to loosen the cinnamon bark.  The interior parts of the bark (the center) is inedible.

**Cinnamon should be stored in a cool, dry place. Date the containers so that older stock will be used first. Store them off the floor and away from outside walls to minimize the chance of dampness. Keep your spice container tightly closed after each use, because prolonged exposure to the air will also cause some loss of flavor and aroma.

Well, there you have it. Complete information on everything that I could find out about Cinnamon. Click here for Part One and here for the introduction to my Spice Series. Again, if you have any comments, questions, or extra information for me, please feel free to post in the comment section below!

Homemade Hot Cocoa Mix (perfect for a gift!) This homemade hot cocoa mix makes the perfect gift for the holidays. This is a dairy-free hot cocoa mix, so that everyone can enjoy it by mixing it in the milk of their choice (cow milk, almond milk, coconut milk, etc). This hot chocolate recipe can also…

This is a continuation of my Spice Series. Welcome to my information on Black Peppercorns.   **In ancient times, black pepper was considered the “King of Spices” and it was more valuable than gold. One’s social standing was even measured by how much black pepper was owned by the household. **One of the reasons it was…

The Spice Series: Cinnamon   Welcome to my Spice Series! This is my information on Cinnamon. This is probably one of the most common and most popular spices in the world. If you ask around, it is difficult to find people who do not care for the taste of cinnamon. Cinnamon has been used for…

This is continuation of my Spice Series. Welcome to my information on Nutmeg!     **Nutmeg is like no other taste in the world. It has an intense, sweet taste that has made it a popular and universal spice for cooking and baking. **Nutmeg is the seed inside the fruit of the nutmeg tree. The…